The story is based on a fairy tale, which I have translated to our modern life, but it’s still firmly a fantasy.

In Barb’s bedroom, Greta awoke and stretched to discover that her wrists were joined and chained to the bedpost. The cuffs were padded and she was comfortable, so she didn’t fret unduly except to wonder about Hans and what he might be doing with Barb.  She had spent the night using her oral skills on the older woman. She’d made her come with whooping, shrieking glee several times before Greta was allowed to rest.

As nothing had been done to relieve the young sub’s frustration, her slick pussy was still humming with frustration.  Orgasm denial was nothing new to Greta, but as she lay on the bed she tried to get herself off by rubbing her thighs together while tightening her pelvic muscles repeatedly. She was just beginning to achieve low level thrums of pleasure humping her hips against a wedge of blankets that’d worked between her thighs, when Barb appeared.

“No!  Stop that!  Dirty girl!” Raging she flipped Greta onto her back slapping her thighs and bare breasts repeatedly. Barb reached into a drawer and selected a spreader bar which she attached to Greta’s ankles, forcing her legs apart.

Greta lay helpless, a little sore and panting with shock.  She looked up at Barb, her huge blue manga eyes brimming with tears.

“I’m sorry mistress, I was lonely.  I missed your loving touch.”

“You don’t come unless I allow it girl.”  Barb’s voice was a snarl, yet her nipples had hardened.

“Please mistress, you tasted so good last night, I can’t stop thinking about you. Let me pleasure you.”  Greta dabbed at her bottom lip with a dainty pink tongue, writhing enticingly, despite her bound state.

Barb’s snarling tone couldn’t disguise her arousal. Greta saw a flush tinting her chest and neck while bullet-like nipples strained against her blouse.  Barb pressed the pointed tip of the strap-on against Greta’s spread pussy to rub back and forth, parting the swollen lips and teasing her clitoral bud.

“Aaaah yesss,”  Greta bit her lip, as her arousal spiked. She wanted more despite the trickle of fear in her belly.

Greta lay spent, gasping with aftershocks. The fucking was over. Barb released her engorged nipples while slowly withdrawing the phallus from between her submissive’s thighs. It was coated with the viscous evidence of her arousal, at that moment Greta’s hole looked open and sloppy.

“After you eat, shower.  If you touch yourself, I’ll know.”

Barb’s tone was stern. She pointed to the corners of the room, where Greta saw wall-mounted high-tech cameras. Barb left, locking the door behind her. 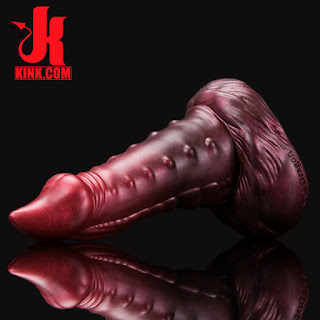 This story is submitted for the #WickedWednesday meme & for #EroticFictionDeluxe Please click the link to see who else is participating.