It was a funny old situation, I was home alone because my OH was taking our eldest back to his student accommodation.  I was watching TV in bed, both the dogs sitting on the duvet.  I thought “they won’t notice, do what you gotta do” but as soon as I switched my vibe on, they both looked up at me!  They kept watching me, obviously wondering where the high pitched buzz was coming from, but I carried on.  Lubed up, I was  gently stimulating the outside lip area with the g-spot vibe.

After a while I wanted more, so I began to gently penetrate with the glass dildo – I love it when it’s chilly (it  feels like a ‘punishment’ to take it in all cold: my kink I suppose).  This was all feeling lovely but I wanted more, mental stimulation perhaps, so I tried to read some erotica.  But – I couldn’t advance the pages on my i-pad as both hands were busy!  So I put my i-pad down, closed my eyes to get into it a bit more (the dogs were no longer watching – thank goodness) then the vibe ran out of charge!  FFS!

However the next morning I used my Lelo Sona Cruise in the shower,   I held it against my clitoris and the wishbone shaped fleshy area which radiates down from it and I had a whopper of an orgasm!  I find it very intense thrumming myself while trying to remain standing- so I guess the previous night’s failure counted as edging! 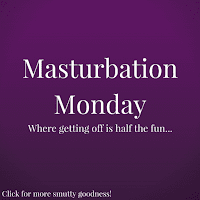