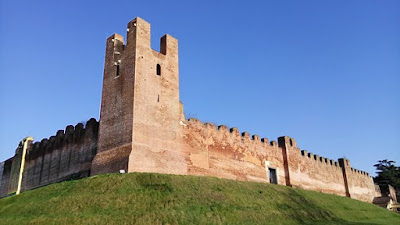 (You may wish to begin with part 1 & part 2 of this story, but in summary Princess Violetta has made a bargain with a dragon to capture her, and in doing so to save her from a detestable arranged marriage)

As the dragon flew over the village which hugged the base of the castle he observed doll-sized peasants starting their working day, the shepherd taking his fluffy white flock up the grassy slope and the blacksmith stoking the fire in his forge.  On the grass quad within the castle walls he saw several maids in green dresses and his target, Princess Violetta in her pale gold gown.  She was on her knees wetting her cheeks with the May morning dew; Seeing her prostrate in salutation to this tradition stirred something in his loins.  He sucked down gulps of morning air, preparing for a fanfare of flame.

He began to swoop, drawing his wings in, so he dived at her.  The maids registered his presence  at the last moment, and flattened themselves to the ground squealing. Most scrambled to get away, saving themselves, none shielded the Princess from the apparent danger.  He flung a forelimb around her and growled a burst of red and yellow flames to keep the soldiers back.  The Princess clung like a limpet within his grip, so clamping his foreleg to his body, the dragon began to flap his wings, pumping air under them until he left the ground.  The ladies in waiting screamed and wailed while the palace guards gathered, advancing with swords and lances, but the people got smaller by the minute as the dragon rose into the sky.

The Princess marvelled at the warmth she felt crushed against the dragon’s scaly chest.  As the air currents swirled from his flapping wings her eyes watered while her heart thumped.  Below her, the palace guard became scurrying specks, her father’s kingdom was spread below like blankets of colour and texture, a patchwork in natural greens and earthy hues.  She closed her eyes to the departing lands of her childhood and focused on the sensations of rushing wind pulling at her hair and robes, and the heat and power from the dragon’s chest with his thumping heart and his beating wings.

The dragon landed once for the Princess to gather her belongings and again in valley of shale and slate for them to drink water and rest, before setting off for his new cave.  The Princess was aching when they arrived, her body sore from hours of holding on tightly.

“Fetch me water and firewood,” the dragon commanded, and instantly she rebelled.

“I’m tired!” her anger sparked, “I need to rest.”
The dragon turned his scaly head and fixed her with his yellow eyes, a message of controlled fury in his stare.

“Fetch me water and firewood,” he repeated. The Princess swallowed hard.  “Do I need to remind you of our bargain?”

“Where is the vessel?”  she asked, her chin held high, yet her knees were knocking.

“You will find all you need in the cave.”  The dragon’s eyes were closed now, but Violetta curbed her fury and skirted around him to search for a bucket in the gloom.  She moved past the dragon warily, then down the rocky slope in search of a source of water.

“Wilful,” the dragon observed to himself before he drifted off to sleep.  “I shall enjoy breaking her.”

There were no words of thanks for Violetta when she returned, dishevelled and tired, with a bundle of kindling under one arm, blisters on her feet and a bucket of water hitting her calf with every step.  Her fury simmering, she set them on the ground and sank onto a large rock to rest.  Within moments her eyes closed and she began to doze.

The dragon observed her thoughtfully, noting the swell of breasts at the neck of her gown, and her dainty, pale feet. Her silken slippers were now in shreds, only having been designed for ladylike walking and dancing.  His forked tongue flicked out and tasted the air, detecting fragrances of pine-needles underlying the stronger tang of perspiration.  How he longed to run his tongue down her neck and into the dark valley between Violetta’s pert breasts.  Under those orbs would be delicious salty deposits and in her armpits too, but the greatest pleasure would be curling it around her nipple and flicking teasingly with its split tines at the deep pink flesh until it puckered and tightened to a hard, yearning stalk.

The dragon groaned and his tail unfurled, its tip becoming rigid and sensitised as he luxuriated, enjoying dreams of taking his pleasure from this tender morsel of female flesh. Many centuries had passed since the dragon had encountered a female of his own species and coupled with her.  Yet there was great pleasure to be gained with a human woman using his prehensile tail rather than his cock.  Over the years he’d schooled several women to fulfil his needs, enjoying the training as much as the sexual acts they performed.  They must be willing, must enjoy the subjugation, but the dragon could always detect it and this human had ‘use me’ written all over her, it was why she was so dissatisfied by her previous life.

Yes – they would both enjoy this partnership!

This story is part of a series, hosted in earlier and later posts on this blog. I have linked this episode up with #WickedWednesday for the prompt : Medieval Click the link to see who else has shared.