One day this week it was #NationalLingerieDay and so my twitter feed was flooded with pictures of fellow bloggers modelling lovely lingerie.  I joined in too – posting these selfies. 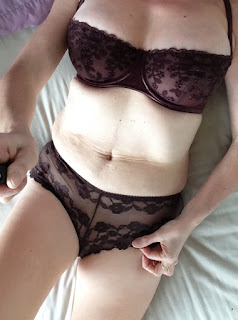 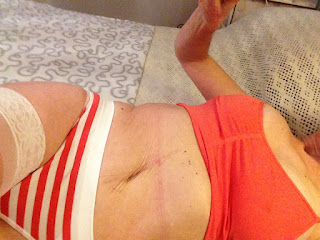 There were some fantastic shots of all body types in their underwear and many of those modelling shared notes on where the items could be bought.  One picture, however, caught not only my eye, but my imagination!

@CandysReviews posted a selfie which she told me hadn’t made the cut for a recent #SinfulSunday,  but which had my mind racing, plotting a story about what had led up to that moment.  Candy has previewed my homage to her and has given her approval for me to post it:

“I honestly loved it!
I feel really honoured to have inspired such an awesome piece!! X”

It had been a long day and Candy planned to shuck off her work clothes and take a steamy shower, letting the pounding water droplets drum at the knots of muscle around her neck and shoulders, washing away the stresses of the day.  She wrapped herself in a towel (pink and fluffy of course!) and turned the water on, twisting her hair up and out of the way.

She soaped herself, massaging the trails of bubbles over her generous breasts and firm thighs, aware of a tingle building in her nipples as the jets of hot water beat down on them.  She used a soapy shower mit to rub the suds around, keeping her skin smooth and exfoliated, before allowing her teasing fingers to roam over her buttocks and labia as the water played over her sensuous curves.

The hot steamy shower made Candy feel relaxed yet enervated, blood flowed to her intimate places, plumping her nipples and warming her pussy, and erotic images began to dance through her subconscious.  What she needed now was a strong embrace and a firm hand, she wanted a take-charge lover to put her through her paces, to ride her hard and stable her while she was still damp!  She shivered at the thought of the raw animal sex she’d like to have as she stepped out of the shower and began to towel herself dry.  As she rubbed and buffed herself she noticed how her body readied itself for sex, and she smoothed a rich lotion into her skin, keeping her body soft and perfumed.

As she moved to the bedroom she was pleasantly surprised to see lingerie laid out on the bed, and a glass of wine on the bedside table.  She purred inside, realising that seduction was on his mind too.  He’d chosen one of her favourite lingerie sets, black lace adorned with pale pink ribbon: a bra which really hugged her voluptuous breasts and a hip enhancing girdle with suspenders.

What made her pussy really slick was noticing he’d put out a new pale pink collar and the matching handcuffs – a gift he’d recently bought for her – claiming her as his baby girl, his plaything.  This would be her first time wearing them so she felt elated and nervous, wondering what sort of play he had planned. 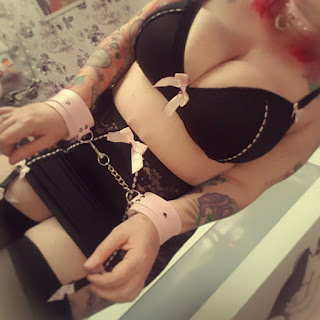 She shrugged off the towel and tipped her breasts into the cups of the bra.  As she fastened the hooks and eyes behind her back she caught a glimpse in the mirror of the black satin cups shaping her boobs and holding them high, making pillowy mounds and a deep valley between.  Candy shimmied into the girdle and smoothed silky black stockings up her legs, the artwork on her thighs curled around her curves to give her outfit an edgy ‘bad girl’ look, which she knew he admired.

Next came the collar, and its soft pink leather caressed her neck as she fastened the buckle at the back, centring the heart-shaped link at the front.  He owned her when she wore this, she was his to command and control.  Yet the colour and the heart showed it was a relationship of love and trust, he’d never ask her to do anything she was uncomfortable with.

Her pink hair fell to her shoulders, long enough for him to grab a handful and twist if he wanted to steer her slutty mouth to his cock or hold her while he took her doggy style.  Candy’s nipples hardened to aching peaks when she remembered how it felt to surrender to his wishes, giving her body over to his pleasure.  Those were the times when she didn’t chase her own climax, or take any initiative, instead she gloried in being used as his fucktoy.  If his penetration bruised her or chafed her, if he took his pleasure and left her frustrated, she was satisfied by these raw acts.  To be fucked or to suck, to offer all her holes for him to rut into was her mission which she relished, because she felt power from driving him wild with desire.  When he couldn’t decide whether to spank her or kiss her, that’s when Candy felt she’d truly triumphed.

She took some sips of wine, waiting for him to come back upstairs,  getting a slight buzz from it, her head felt pleasantly relaxed and hazy.  Finally she fastened a cuff firmly around each wrist – they were padded and smooth and her favourite baby pink – before using the clasp to join them both together, securing her wrists just a few, limiting inches apart.

This was the way he found her, bound and dressed for his pleasure, when he entered the room.  Candy knelt  at the foot of the bed, wearing killer heels and the lazy smile of anticipated pleasure, awaiting his twisted plans for this evening’s play.