Skip to content
My man and I had been together a few years when he put the idea in my head. He couldn’t believe how much I talked about sex. The reason being he was so easy to be open with. I had not enjoyed such honest sexual conversation since I was young, so I took advantage of it Anyhow, at that time I was going to start a blog about nutrition, as I am qualified in that area, but at the last minute I changed my mind and made it a sex blog!
That’s a very good question and one I will be writing a post about sometime in the near future. Lets just say for now that a version of May More was my name once.

I started my blog near the beginning of 2016 but because of a serious injury I sustained it was put on the back burner until about a year ago.

Apart from whips, rope and the occasional blindfold we don’t really use many sex toys. I have a butt plug I quite like and recently I did a Guest Review for Molly Moore and got to keep the bullet vibrators – They have become a welcome addition to my sex life! Since then I have certainly thought about trying some other toys.

Goodness, I don’t know. I have my mind that constantly thinks about filth so I think I would skip the toy and take a good book!

Sexuality seems to be a loaded question these days. I think I am heterosexual – I have never had sex with a woman. Though when I was a teenager a girlfriend and I explored each others bodies a little. I really think you fall in love with the person, not their gender. Hope that answers the question.

The character Roy Batty from Blade Runner – played by Rutger Hauer. In fact Nero put out a tweet with a fab photo of him only the other day.

Years ago a boyfriend of mine was trying to shag me in a shop doorway in London. That was quite amusing as even though it was late at night we were disturbed a few times so gave up. I remember travelling home on the train with my knickers in my pocket, smiling. 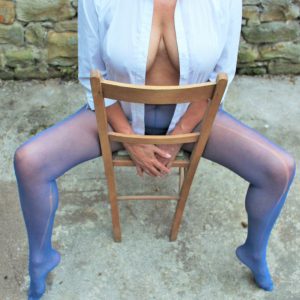 We spend 24/7 together so don’t really get into the sexting. There was a time before we were a couple when we would text sometimes, but they were usually more serious and only occasionally would it be class it as a ‘sext’. Also my man hates the phone so it never gets overused.

Difficult question – I remember seeing Nine and a Half Weeks years ago and loved some of the scenes in that. But Mickey Rourke (then) was so damn sexy.

There are so many great blogs out there. I could write a list from memory of all the ones I like and it would fill up another page. But if I have to name just one it would be Cara Theron’s blog. I love the general style of her writing and even when her topics are slightly controversial she never sensationalises the story, it remains believable. I also enjoy her more personal pieces – If I had time I would read something of hers everyday

Thank you so much for sharing your more ‘private’ side with me and my Dark Darlings!
It was fun!
You can find me at my blog Sex Matters and on Twitter as May More.

[Please excuse the inconsistency with font, I always have trouble formatting these interviews into my blog … Posy is not tech-y!]