OK – this was confusing!  She could not stop looking up another girl’s skirt!

She liked boys, she knew she did, she’d done some thrilling kissing with boys and let one feel under her jumper but over her bra, yet she couldn’t take her eyes off the glorious glimpse of pristine white panties under an older girl’s games kilt.
Her year were gathered in the library to do prep, while the rain pelted down on the lacrosse pitch and dripped from overhanging trees. The goal nets hung abandoned, soggy and wet, while the 2 games mistress retreated back into the staff room with a cup of coffee. There was general shuffling, huffing and fidgeting going on in the library, but most people were knuckling down and tackling work they’d been set earlier in the day.
The older girl was a legend to younger years; she was in the school lacrosse team, tall and slender with fabulous deportment (school gave awards for that – walking with a straight back and looking poised). She had long smooth legs, great hair, smooth complexion and a pretty face. She seemed uber cool to, but she was also a rebel. Sure, there were tales of her sneaking out of school after curfew … but we’re talking choice of underwear. Lisa was not wearing navy gym knickers!
Gawd but the regulation gym knickers were ugly! Usually baggy, they were made of a towelling fabric, but because of the brevity of the regulation games kilts, most girls wore them to protect their modesty. Not Lisa, she simply wore white briefs, so sitting on the edge of her seat at the table with her legs uncrossed, the younger girl could see between her legs to a triangle of white cotton. She was fascinated.
She wasn’t hot and turned on, so that was 1 positive, but she kept stealing furtive glances at Lisa. It seemed she was trying to ‘learn’ from her, how to channel her sexy yet innocent air. What kind of panties did she wear, what shape? Tanga? Bikini? (This was before the advent of boyshorts and thongs) and where did she buy them? Was Lisa’s skirt as short as hers, or shorter? How did she keep the pleats so knife-sharp?
As she was contemplating these questions, Lisa looked up and caught her looking up her skirt. A look of irritation flitted over her face and she crossed her legs, shifting position. Argh! How to style this out? She looked like a peeping tom, Lisa might start a rumour that she was a lesbian (a fairly common rumour at an all girls’ school as you can imagine). She tried looking round the room at other girls, and what she could see under their tables, as if she wasn’t fixated with Lisa, before she realised this made her look even more like a lesbian! 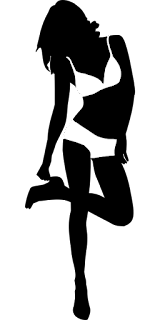 She turned her attention to the maths, long division made even less sense than usual, then sneaked another peek. Lisa was gathering up her books and pens, she turned her back and left the library, looking cool and elegant, but not swinging her hips sexily (because that would ruin her deportment). Hey! Is that what the award was about, trying to squash the girls’ urges to channel their inner ‘foxy’?
Once Lisa was gone she tried to analyse what she’d felt and why she’d been so fascinated, and it seemed the same thing was true back then, with the 14 year old version of me as it is now. I look at girls with a critiquing eye – are they sexy or alluring? If so, how? What are they doing or wearing that I can mimic? I’ve shaped my ideas of what grabs the attention of the opposite sex and ‘reels them in’ from other women who I consider exemplary. So if you ever catch me gazing at your cleavage, your elegant long legs or your peachy, cute butt, please feel flattered as I’m probably planning how to steal ‘style’ tips from you.