I did learn latin at for 1 year at school … but this story is not about that. It’s a tale of innocence lost, but perhaps not quite in the way you’d expect if you’re used to my writing.

He had pursued her determinedly since the girls first arrived at the resort.

Poppy acted as ‘guide’ because they were staying in her family’s apartment, she’d been here on several holidays. For all 3 girls,though, it was their first holiday without adults.  For Anna it was also her first holiday abroad and although she was trying to look cool and sophisticated she actually felt wide-eyed all the time.

Anna had only been to a few local clubs in the last year, but yet here they averaged 3 clubs a night. They used the free admittance, first drink ‘gratis’ tickets they got handed by PR people in the commercial centre where they shopped for groceries.  All the clubs wanted to be populated with pretty girls; which  they were, ranging from Anna’s 18 to Kerry’s 20. 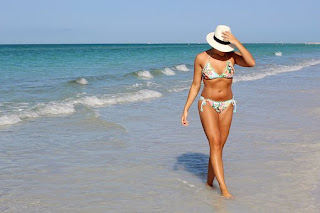 He worked at the Pink Flamingo, the club on the hill. It’s rocky location made it the beacon of the resort. Most people ended the night there, even if they began their drinking and dancing at clubs and bars in the commercial centre.

His cousin Marco was tall, dark and rather flashy, the type which made Anna nervous, but Poppy was hot for Marco, which made him off limits.  He was quieter than Marco (his English wasn’t so good), but he watched Anna intently and always made a beeline for her when the guys joined the 3 girls at the bar of the club.  When he sat near her, she felt the smouldering heat from his leg pressing against her.  She was conscious of his gaze raking over her body, already tingling from the day’s sunbathing.

Her friends would nudge her whenever he came over, teasing her about the smouldering looks he gave her. They discretely gave Anna space when they sat or stood together.  She told him a song was her favourite, so he always made sure it was played soon after she walked into the club.  Flattered by his attention, Anna was confused how to deal with it.

The girls were dancing together, like most nights.  All the best music came from the UK; knowing all the songs they were singing as they danced.  Marco came over to peacock around them, his trousers were obscenely tight. Today Poppy was sulking with him, turning her back to ignore his slick, practised moves; jealous over how much attention he’d paid to another girl. Anna and Kerry tried reassuring her it was part of his job – he and his cousin provided PR for the club FGS!  So the girls continued dancing while Marco & Poppy drifted aside for another of their frequent rows.  Kerry and Anna watched out of the corner of their eyes,  this happened all the time, like a repetitive soap opera. 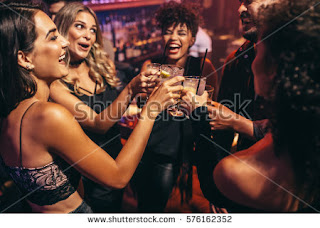 He joined them and started to dance, making Anna’s heart beat faster. He danced well, sinuous and fluid without the showy element his cousin Marco had.  He kept close to her,  his moves reminiscent of a flamenco dancer. Anna felt  ‘sex’ coming off him in waves.He was nothing like the boys back home who lingered at the bar until the end of the night, only selecting a girl as partner for the final slow dance.

He beckoned to her to follow him. Anna wanted to but what about the others?  It seemed Marco and Poppy had made up and were heading to the bar. Kerry was dancing with a mixed group they’d met over a game of beach volleyball. She could leave the dancefloor and not feel she’d ditched them.

She followed him to the back of the club and through a door marked “staff only” . She found herself in an atrium or hallway, well lit but deserted, a massive staircase climbed to an upper floor and wound to another below.

“What?” she asked him, expectantly.
He indicated a plush velvet sofa against the wall, so she sat. Her short skirt rode up her slim thighs, showing off her golden tan.

“I never get you … lonely” he said. His broken English was endearing, his look intense.

Anna swallowed, suddenly aware of just how alone they were, and on his turf.  Her pulse kicked  up a notch as he gently cupped the side of her face and leaned in to give her a deep, tongue dancing kiss.  Her libido asserting itself made kissing powerful foreplay, so Anna allowed her mouth to respond and her tongue to dance back. She was unaware of the contract she might be entering into [her virginity was still very much in tact].

“You are so beautiful,” he breathed, as they broke apart.

Anna felt giddy from their embrace. Her insides were liquid lava and her breath caught in her throat.  Not sure how to respond she looked deep into his mesmeric brown eyes.

“I have to look at you,” he gazed at her face, “I must touch you.”  Smoothing her hair behind one ear he ran his hand down the side of her face. It skimmed her neck, before his burning gaze settled on her cleavage.  Continuing their journey down, his fingers opened the buttons of her top.  He dragged the fabric down and settled it under her underwired bra, feasting his eyes on her breasts, which swelled delightfully out of the lace cups.

He didn’t speak, just looked, and that’s when Anna realised the power of her breasts.  No longer would she try to disguise them, this guy was bewitched by them! He reverently cupped them in his hands before burying his face in her cleavage. He began to kiss her, his stubble rubbing the soft, tanned flesh which made her tingle at her core.  Cupping one in each hand, he used his thumbs to rub insistently back and forth over her nipple tips. Sensations of delight raced around her body.

It shocked her to realise her pussy was getting moist. Although Anna knew the mechanics of sex having read the racy passages of many popular novels, she had nothing concrete to relate it to. When she had touched herself, it had never occurred to her to touch her breasts.

He pulled down the edge of the bra’s lace to tease out one nipple, Anna froze with shock, no boy had ever seen her bare breasts.   Looking down she saw that the white triangles left by her bikini made a frame to her rosy nipples, which were now pinching and darkening with desire.  She felt an ache and a burn in an area of flesh which, until now, she hadn’t associated with desire.

Anna observed the top of his head as he bent to his task, licking and nibbling at her nipples, unleashing flashes of sensation and tingling which seemed hot-wired to her pussy.  She watched in languid fascination. He licked and sucked, moving his attention from one nipple to another. She floated off on another plane with lust.

It was strange, Anna felt detached from what he was doing, anchored only by the, yearning sensation he was generating between her legs.  She felt slick as a pounding pulse developed in her panties. She longed for more but was unsure of the next step.  All she’d experienced previously were her own questing fingers, rubbing over the top of her knickers.

Anna’s breasts felt heavy and swollen, ministrations awoke a hot desire, she couldn’t get enough. She longed for more so she parted her thighs and let her head drop back to draw him in closer.  His hand landed on her leg, hot and heavy, like a branding iron. She squirmed, inviting him in.

“Touch me” her subconscious shouted, “stroke, me please me.”  The nerves she felt were trampled by the throb of desire beating at the cleft of her thighs.

When his roving fingers brushed over the bare flesh of her upper leg to sneak higher, they slipped under her panties with ease. They sank into her warmth and wetness as if probing melted wax.  She had no time to feel bashful that she was soaking wet from his caresses. While she cringed to hear the squelch of her fleshy folds against his delving fingers, he did not seem concerned.  Instead he seemed delighted. Stretching and stroking under her skirt, his hand was buried in the folds between her legs. Groaning with pleasure he continued to suckle her breasts whilst exploring her pussy.

“I don’t even know how many fingers he has in me!”  Anna’s subconscious barely registered sensing her pussy throb and pulsed around him, building inevitably towards the rush of a climax.

At that moment a door banged, followed by footsteps pounding down the stairs.  A harsh male voice said something to her companion in Spanish, and he lifted his head to hurl back a response.

Anna opened her eyes blearily, back to sanity with an almost painful bump.  What was she doing? They were a communal space where anyone could (and did) see what they were doing. Suddenly , she felt shy and ashamed now the mood was broken.  What had that other guy said?  She’d bet he’d called her a slut or similar.

Anna pulled down her skirt and hastened to re-buttoned her top over her breasts.  She wiped her hand across her mouth where her lipstick was smeared then ran fingers under her lashes where her eyeliner sometimes smudged.  She could barely look at him, although he’d been more intimate with her than any person, ever. He seemed to feel the same way.

He led her back to the nightclub, which still rocked with the back beat of music as strobing, twirling lights hit the obligatory mirror ball.  Anna went back to her friends and he disappeared into the crowd, reappearing later in the DJ booth where she couldn’t reach him.

She was in a daze the rest of the night, barely interested in dancing or drinking with her friends.  She withdrew into herself – torn between the joy of discovering how exciting it was to have someone else touch her intimately and the bitter feeling of shame; perhaps she’d acted like a slut.

Later when they left the club, her friends giggled and stumbled, trying to hold each other upright as they navigated the stone steps.  It was dark, the only light in pools at the foot of each lamppost. Anna almost didn’t see him – tightly clasped in the arms of another holidaymaker.  The girl’s slim body was pressed up against him while his hand roved under her frilled skirt.  He glanced briefly at them, then buried his face in the girl’s long hair, pretending not to see Anna. She endured the stab and twist of rejection.

She felt physically sick, but kept walking. Her friends saw him too and were stunned that he’d switched his attentions to a new girl.

The last thing she wanted was a scene on top of her humiliation.  Kerry said boys like him probably had a new girl each week or fortnight, aligned with each new influx of holidaymakers. That didn’t make the pain any less or dull her shame.

Poppy said he was persuasive, skilled at getting what he wanted.  Anna had been one girl in the revolving door of his lothario life.

Anna stopped on the stone bridge to dry-heave over the parapet.  He had cheapened her first sexy experience, but it’d wised her up to the way some men behaved.  She wouldn’t be fooled so easily again. In future she’d take care, her feelings would not be invested, instead keep things casual. If she made sure to take her pleasure, then she wouldn’t feel used.

Innocent Anna had wised up, look out future boys!