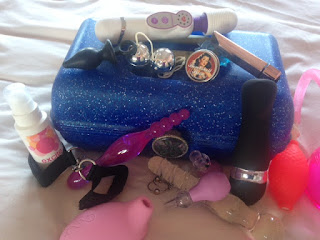 This is just the sort of toy which deserves the title!   It is tiny (as you can see from the picture)
and it’s so pretty ~ the rose gold is a delightful colour ~ so it could be slipped in my makeup
bag, mistaken by the uninitiated for a fancy lipstick or mascara wand. 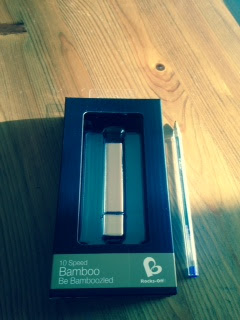 I’m not going to rave about the packaging because I throw that away, but it was neat &
classy looking, ideal to store the toy in (although I use 2 lockable toy cases) and the vibe
itself came with a battery included, so it was good to go from the moment I inserted it the
correct way round!

I put music on in the background, got myself comfy and ready to play!  (Do others do this?
I expect you do if you have the time/opportunity)  Self pleasure is best if you don’t have to
rush, but boy O boy, I was eager to try out the Bamboo!

Point No. 1, which I think’s a slight negative, is that it starts in the middle of it’s vibe power,
you need to use the 1 button to scroll it through all patterns to get to the quieter, more
gentle vibes.  Keep pressing the soft rubber button on its side from start setting to move up
to patterns, these are all at quite a high vibe intensity, it’s a powerful toy.

I nearly got the giggles ~ not because the vibes are tickly ~ but because they reminded me
of the back beat of a grandiose anthem, like the intro music to Star Wars or similar.
Anyway, Darth Vader doing loud breathing behind his mask isn’t a kink of mine so I pushed
those thoughts aside and carried on scrolling through the whole range of (7) vibe patterns
and went back to a low constant speed (1 of 3), which suited me to start off with.

Soon I was ready to try using the narrow tip for pinpoint application on/against my clit –
but this didn’t suit me too well, I felt too sensitive to keep it in place for long;  I imagine
this’ll vary for different people and at different stages of arousal.  Playing since with the
bullet I’ve been proved right.  I haven’t yet let my OH use it on me, as I feel this could go
awry, it’s hard body and high pitched vibes need to be under the control of the owner of
the vagina!  Otherwise I think this toy could easily make me too sensitive and lead to
frustration rather than joy!

Using it since, it doesn’t always need to be accompanied with another toy, it does the trick
(and quite quickly if that’s what you want) by itself.  It’s vibes are slightly high pitched and
buzzy, which is no problem for me, but I read that lots of you prefer deep and rumbly.  It
is quiet-ISH: if you share your house with others, I’d recommend having TV or music on to
provide disguising background noise.  If you want privacy in the toilets when you’re out &;
about to enjoy a ‘wank’ with it, I’d imagine people will be able to hear.  (But do you care?
That’s really up to you – but I have a great story about that which I’ll put in my next post!)

The Rocks off Bamboo is good value for the price (£16.99).  It’s small, discreet,
lightweight and attractive.  The battery seems to last well and AAAs are easy to get hold
of (no not those awful watch batteries that we hate!!)

I haven’t even told you that it’s waterproof!  Yeah imagine the fun it’ll be in the shower/bath
(be sure you’ve twisted the battery compartment tightly closed).  Of course that feature also
translates to it being easy to clean – a rinse under the tap & a teeny bit of soap/
detergent is all that’s needed, or perhaps you prefer to use sex toy wipes or a specific spray
(as I do).  If you like to use it with lube, use silicone or water based, neither will damage the
finish.

At first I couldn’t work out how to switch it off, so I twisted the barrel to break the connection
with the battery, which did the trick, but I must find out the proper way!  Anyway, I’m going to
give this little darling a 9/10 (it only lost a point because it was smaller than I expected) and
suggest that it is an excellent toy for beginners.  It’s a very useful addition to all ‘clit owners’
toyboxes, especially if you like to take your sexy adventures out and about!  Don’t forget to
share:  buzzy stimulation is lovely on nipples, around the frenulum and held against the
perineum!
I bought this item with my own money, so opinions expressed in this review are entirely my
own and unbiased.  I think this would make a great stocking filler the adult ‘minx’ in your life!