I am updating this post so that I can share it on #LIFE. Originally it was an opinion piece, but has also featured on the meme for Kink of the Week (@MollysDailyKiss) because it’s about one of my favourite fabrics : Fishnet!

How sexy are fishnet stockings?

They are my favourite kind of hosiery, stockings in particular, and when I wear anything made of this stretchy fabric makes I’m instantly more rebellious, powerful, I feel like a desirable vixen with a consciousness of bedtime fun!
In the 70s the punk girls adopted fishnet but made it more grungy with rips and holes, showing ever more bare flesh between the criss-cross fibres.  In the 80s Madonna’s love of fishnet made it part of the uniform for ‘Wannabes’ but she diversified it to tops, gloves, vests, footless tights – dancewear.  In recent years it’s been adopted by goths  to express their dark, tortured souls, combined with corsets to give glimpses of their pale flesh.  For most people, despite these fashion fads, fishnet is a textile which revs things up in the bedroom!
Why is this I wonder?  I researched, and back in the early 1900s there was an Aesop’s Fable: a peasant girl must solve a riddle to marry a king – “come to me not clothed, not naked and not riding …” so she draped herself in a fisherman’s net.  What an alluring sight that must have been, the interplay between what is seen and what is obscured.  I read elsewhere that in the middle ages wrapping your lower limbs in fishnet may have been part of a spell to increase fertility – so the latticed threads are powerful stuff! 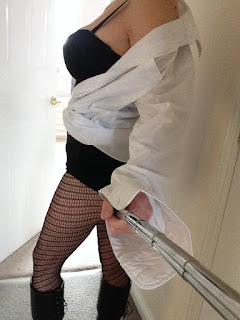 The grid effect caused by the netting intriguingly emphasises both curves and muscle definition.  Fishnet has always had an association with dancing girls, and further back in history that meant ‘loose morals’.  The flappers of the 1920-30s adopted fishnets stockings with their new shorter dresses (yeah, just below the knee was short in those days) because they had more give in them than silk stockings and allowed for wild dancing and partying.  In fact the little minxes ‘rouged’ their knees to draw attention to them.  O the thrill of newly-bared flesh, easily visible through the little holes of fishnet!

I believe the adoption of fishnets by 1950s glamour models for their pin-up photo shoots is what seared the concept of fishnet  onto our psyche as a fabric which sexy women wear to increase their allure.  Fishnet clung to  to their curvy legs and increased the illusion of taper, while all those glimpses of bare flesh between the criss-crossed threads inflamed the passion of the adoring beholder.  These images are iconic and nowadays no burlesque dancer would leave fishnet hosiery out of their performance wardrobe. 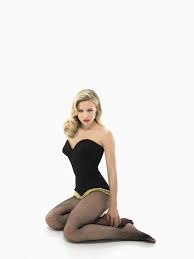 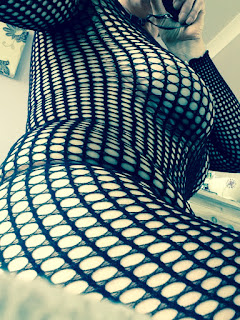 I’ve enjoyed wearing fishnet items of clothing over the years. I instantly feel empowered when I wear them, and the fella has always been eye-poppingly delighted!  I rocked a fishnet “bodysuit”, I’ve had fishnet tights and stockings in various sizes of mesh and various colours (none are as sexy as the original black).  My Dark Darlings, a recent present to myself was a fishnet mini dress, which I’ll never wear outside the bedroom!  But I love the way it hugs my curves and reveals way too many secrets!

Update folks! I wore this dress at Eroticon 2019 for the meet & greet on the Friday night. I wore it like a top, with a black bustier underneath it, a red biker jacket on top and black jeans. 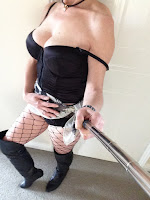 I had promised myself a pair of fishnet stockings or hold-ups in the extra large diamond pattern (like Rhianna wears in her Umbrella video) for the longest time ~ as you can see here, they are in my wardrobe now!
Researched using www.thistailoredlife.com 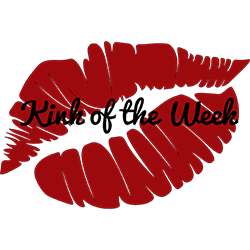