This was one of my earliest posts, but it fits exactly with this week’s Food for Thought Friday

Can you remember your earliest memories relating to sex?
I always imagined that people didn’t really have sex fantasies until they hit puberty, because the body wasn’t ready to act on them until that point. But now I think we may have them earlier but don’t process them as being sexual, or not until we look back because we wonder where our ‘kinks’ came from.
When I wrote the erotic tale ‘Fine Day for a Picnic‘ I was inspired by my early experience of getting a thrill from being tied up.  I’d found the idea exciting since I was really young, around the same time that I loved watching the Scooby-Doo cartoon. I loved that show, not just being scared by the ghosts and monsters that they tracked down and chased. I longed to be Daphne. Not Velma who was clever and great friends with Shaggy and Scooby, but over-feminized Daphne, simply because she was always the one taken captive and tied up, used as bait until the rest of the gang rescued her.
In these scenarios the total vulnerability appealed to me, 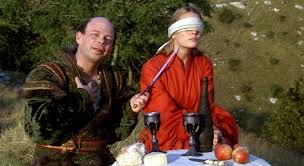 Later in life I found the idea of bound helplessness continued to appeal, especially the way it was portrayed in films:
In the plots to these films, capturing the female character is usually a vehicle for the villain to lure the hero into his clutches or make him more vulnerable. But to me, a helpless girl under threat of being ravished against her will is tantalising. To be unbiased, the heroes being tied up gives me a sexual frisson too!

I can’t think why it took me so long to realise bondage was my kink, when I reflect on what I have got a thrill from watching over the years.  Spanking and whipping is often a theme of period dramas, and the link with this and the ‘non-consent’ scenarios began to make fantasies blossom in my head as puberty sent hormones racing round my body.  I love the series ‘Outlander‘ (books & now dramatized on Amazon Prime/Starz). I was recently inspired to write by a scene where Jaimie Fraser punishes his wife for putting the rest of the clan’s lives  in danger by her disobedience.  He pulls up her skirts and delivers a spanking, using a bunch of nettles to make the punishment more memorable. The scene was described with eroticism and was thrillingly portrayed.

Much is made of the “sexism” in the portrayal of supporting women in the films back in the sixties and seventies. I don’t doubt that in those less PC days (when most people kept their perversions quiet) the film makers knew they were giving the audience illicit thrills by portraying strong, dominant male heroes and villains who used threat and restraint to take what pleasure they wanted from the helpless female characters.  Oh the flimsy, easily torn, costumes, the bodices laced tightly so they pushed breasts up like ripe fruit! How I longed to be dressed like that, to feel the burning gaze of a lust-filled rascal rake over my trembling body.

Are we sure ladies got the vapours?  Might they not have been getting turned on (but embarrassed about) the passion they felt in their loins?  Maybe it was a plan, they wanted to be picked up and carried to a chaise longue by a handsome fellow in tight britches once they had swooned!!

In my twenties I discovered The Rocky Horror Picture Show, it already had a ‘cult’ following at this point and I was incredibly impressed with the costumes. I’ve made no secret of how much I enjoy basques, stockings and suspenders, but seeing Tim Curry wearing a basque, women’s underwear and lipstick with attitude blew my mind. He behaves in a sexually predatory way, he is equally attracted to males and females, there were a lot of exciting concepts for me to embrace. It has fostered in me a strong love of fit looking guys who’re just about contained in their pretty ladies’ underwear.

I’d love to hear which big screen scenes grabbed your attention from pre-pubescence to now and whether you think it affected or triggered your kinks, please comment & share, you might give me and my Dark Darlings something new films to whack off to! 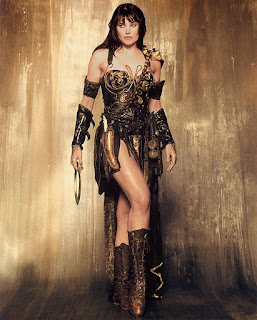 Xena Warrior Princess (less clothes, rather leather straps and armour) and Lara Croft … there are many more to conjure with and I look forward to your suggestions in the comments.

Click the #f4tF link to see who else is on their soapbox about movies.

10 thoughts on “Girls on Film”