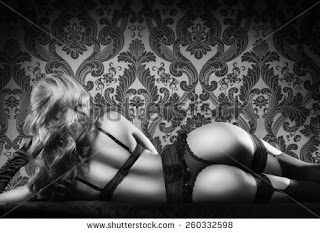 I doubt any of you have gone quite as far in the workplace as Josie does, but whatever your experience, please share in a comment, because I know I’d like the juicy details and I’m sure my dark darlings would too! (you might even inspire my next installment!)

The other slave prowled round Josie, acting predatory.  Their Master sat back in a deep leather chair to watch, his cock still on display, it stirred in his lap, already showing signs of arousal, as Josie knelt, looking helpless and apprehensive.  Her legs were fixed and parted by the spreader bar, her hands locked to her sides with the leather restraints.  The slave girl moved close and unclipped Josie’s bra – which slid away from her body allowing her full, tender breasts to spring free.  With a flick of her wrist the slave whipped those bobbing breasts with a leather flogger which Josie hadn’t even noticed she was holding.  Josie’s chest felt a flash of pain, but it was a slight, stinging assault on her straining nipples which she welcomed.  She bit her lip, waiting as the girl paced round behind her.  Flick! There it was again, stinging blows from all those little strands of leather, they beat on her nipples and the rounded globes of her breasts, causing a burning and tingling til Josie drew in a shuddering breath. Flick, whip, flick, whip; the blows fell closer together now, the flogging alternating between breasts and bringing a heat and tingling to her nipples and pussy which made her moan out loud.

“Maya, enough teasing!”  Master barked.  “I want to watch you pounding her pussy.”

Josie snapped out of her lustful trance at the sound of his voice.  Maya moved around her to remove the wrist to leg restraints, then she pushed Josie forward none too gently, til she was kneeling on all fours.  Next she removed the leg spreader – uncuffing Josie’s ankles until finally the only thing she wore was the black thong she’d had on under her maid’s dress.  This was soaked with Josie’s juices, which continued to gather at her moist slit.  Maya dragged the scrap of fabric and lace down Josie’s hips and off her legs, then she moved and stood in front of her, holding the thong in front of her face. Josie’s ragged breathing dragged in the musky aroma of her arousal, and she felt her cheeks heat with shame.

“Plug that sopping hole Maya!”  he ordered.  “She’s been gagging for it all morning.  I caught her spying on your punishment and diddling herself!”

Maya positioned herself behind Josie, even as Josie chewed on the musky fabric which had been between her cunny lips.  Maya lined the dildo up with those juicy, pouting lips and gripped Josie’s bare hips before thrusting hard, driving more than half of the veiny prosthetic into Josie’s pussy.  Josie groaned loudly; by god it was thick, but it was just what she wanted.  She loved the aching, burning feeling of it stretching her.  She just began to to register Maya pulling out a little before thrusting again, this time deeper, but Josie had time to arch and push back at her punisher.  Groaning with pleasure and effort, they carried on like this for several long, slow thrusts, each one getting deeper until Josie felt the slap of the other girl’s latex undies against her rear and realised she had taken it all!

Josie couldn’t speak, her mouth was still filled with her thong, but she grunted and writhed and pushed back on the girl riding her doggy style, whose thrusts got a little more circular, swiping round inside Josie’s pulsing pussy and stimulating her g-spot, a move which had her climbing the walls of arousal very swiftly.  Her body felt flushed and her focus narrowed to the feelings in her pussy walls, which were clenching to throb and stretch around the big black latex cock pounding in and out of her.  She could only imagine what it looked like to the Master, but it seemed delightfully dirty to have such a long dark pole of latex sliding in and out of her like a piston.  So Josie grunted as she came, feeling a release like never before, liquid seemed to squirt out of her as she pulsed with shock after shock of orgasmic throbs.

The Master rose from his chair and positioned himself in front of Josie.  Maya pulled all the way out of her, leaving her pussy feeling empty and gaping.  She moved round towards the Master and helped Josie kneel up.  Josie could see her own juices coating the full length of the dildo, and once again she marvelled that she had taken it inside her entirely.  Through the fog of her aroused state Josie felt Maya grip her jaw and force it open, letting the wet black panties drop out, then she kept her chin gripped as Master once again presented his tumescent member to Josie for her to suck.

Josie felt powerless to resist, she realised she was being treated as a sex toy, purely for the Master’s pleasure, but somehow handing the control to him had made her feel more aroused than she had ever felt so she licked and sucked as his thrusting cock as if she was in the fellatio olympics!  She laved and rubbed all around it with her tongue, using it flattened to massage around its veiny girth before allowing it to point more to tenderly tease the head of the glans and dip into the hole which was well lubricated with pre-cum.  She continued to lick and bob her head, sucking it’s length until Master indicated, by gripping her head on either side, that he wanted to fuck her mouth.

Master surveyed his handiwork and seemed satisfied.  Josie could hardly believe she had enjoyed so many orgasms, but she felt totally spent now, her limbs were floppy like cooked spaghetti and she sank back onto her haunches.

“Follow me,” she said curtly and she moved towards a door in the corner.  This led to a wet room with enough water jets for both the girls to shower at the same time, so silently they passed the shower gel and hair products between them until they were clean all over.  There were a stack of pale grey towels on a heated shelf and as Josie wrapped her body in one and her hair in another, she began to feel her strength returning, and got courage to speak.

“Do you work here too?” she asked Maya, a little worried about the other girl’s animosity to her during the last sex act.
“No, I do this for pleasure.  I love it!” Maya smiled and she seemed younger somehow.
“He likes to dominate women, and you’ve just passed the initiation test with flying colours.”
Maya ducked back into the Discipline room and returned with Josie’s clothes and shoes.
“Your duties are over for today, but next time you come to work, Master will want you to have had your pussy waxed clean like mine.”
Josie looked down at Maya’s pubis and noticed, not for the first time, that it was completely hairless, the skin in that area was little darker and the clitoris nestled in her slit was plain to see without curls to hide it.
“Master likes to see all the stages of arousal.  I will email the details of the girl I use, she is very thorough and ensures the entire intimate area is waxed smooth.”
Josie felt a twinge of fear at the thought of having such tender flesh treated with hot wax, but she wanted to please her master now, more than anything.

“There will also be homework,” Maya smiled again, and added a small silken pouch to the pile of black clothes she handed back to Josie.
“Insert these balls inside you every day for at least an hour.  Do it when you know you are going to be active, as they will move inside you and this will cause you pleasure and strengthen your pelvic floor muscles.  The master likes his slaves to be tight and toned, for his pleasure.”
Josie could only nod, feeling surprised and aroused at this ‘homework’.
“Am I allowed to cum?” she asked, remembering how strict the Master had been about Maya not climaxing without his permission.
“At this early stage, yes.”  Maya nodded “He will want to raise your sex drive and for you to be in-tune with yourself.  If you can give yourself pleasure, you are so much better equipped to pleasure others.  I’ll also send you details of a yoga & pilates studio, Master will pay your membership.”
“Is that to keep me healthy?” Josie was puzzled.
“More to keep you flexible.  The positions he wants us in can be quite challenging, and you may have to endure some for quite a while, so it’s best to be prepared and trained.  I couldn’t manage this without my regular pilates classes.”
“So you’re happy doing this, with him?” Josie asked tentatively.  Maya nodded enthusiastically and smiled.
“I forgot to ask your name – if we are to work together I should know your name.”
“Josie.”
“Well Josie, I look forward to working with you in the Discipline Zone again soon.  But for now I must clean up the toys and put everything back in order.  But I can tell we’ll have lots of fun, you really suck cock like a pro, and I’ve never met anyone who could squirt before!”
Josie couldn’t help smile, she would never have imagined being praised by another girl for her fellatio skills! But wait, what?
“What do you mean squirt?”
“You squirted as you came when I was pegging you,” Maya replied.  “Squirting’s a female ejaculation, it’s quite highly prized, the Master is going to enjoy that special skill of yours a lot!”

As Josie walked back to the boot room, to put on her normal clothes and boots, her mind was in a whirl.  So much to think about!  The goings-on in this house were not as innocent as she had imagined.  The sex she had experienced had been earth shattering and she was already hooked on the role of a submissive.  Her thoughts swirled round, reliving what she had done, what she’d felt and what she had seen Maya experience.  Josie wanted in, because she wanted more!  The little balls clinked in the silky bag, so Josie peeked inside, they were silver and joined with a cord which ended in a loop (for easy removal she assumed).  Despite the multiple orgasms she’d had in the Discipline Zone, Josie’s greedy pussy twinged pleasantly at the thought of walking around with the balls hidden insider her, pleasuring her while nobody knew.  What a thrill to maintain a straight face and act normally while on the brink of cumming, with her panties soaking wet!

Uh-oh, she was getting a damp pussy just imagining it.  Josie put the silken pouch in her coat pocket, closed the side door behind her and set off down the stony drive towards home.